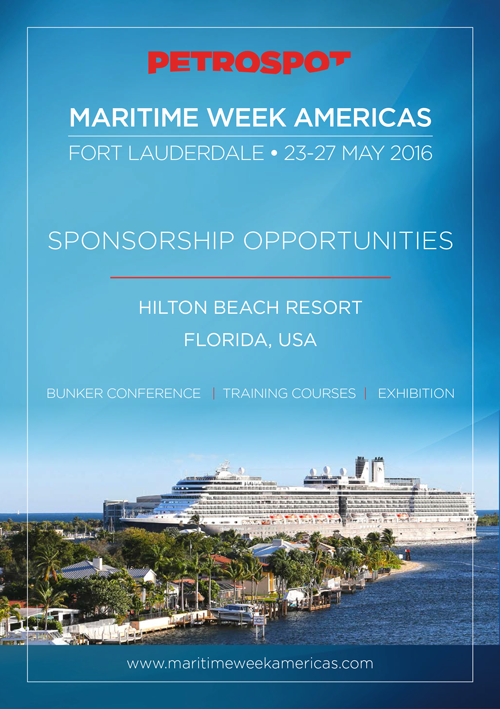 THIS EVENT IS NOW CLOSED

This one-day course is designed for newcomers to bunkering. It covers all the basics, including technical, operations, environmental, commercial and legal issues, and gives delegates a useful introduction to how the bunker industry works.

The course has been taught at many locations around the world and has provided hundreds of newcomers a helpful starting point from which to launch their careers in the bunker industry.

Please note: This course will be run subject to a minimum of 12 delegates. Should you be considering attendance, we would request notification of this in order to manage expectations.
The price of this event includes lunch, refreshments and course materials.

Born in Barranquilla, Colombia, attended Marymount College of Virginia, USA and the Universidad del Norte, Colombia where she earned her bachelor’s degree in Business Administration and also has a post-graduate degree in International Business Management -Universidad Javeriana, and one in Maritime Transportation and Port Legislation in Pronaval, Colombia.

Since 1984, Eugenia has worked with Colombian downstream major oil company Organización Terpel, handling various positions, such as sales assistant, marketing director, operations, sales, commercial manager and company’s legal representative prior to the merger between Terpel del Norte and Organización Terpel. For the past ten years, she has worked solely in the marine business being currently Director of Marine Fuels and she has been an active member of various professional and community organizations such as ABSA, ACSA, Actuar Famiempresas, Marymount Alumni Association, Marymount School Parents Association, Gran Central de Abastos, SACSA, Promitel and Transoccidente.

Eugenia has also been a speaker at the Bunker New Orleans Conference 2000, Maritime Week Americas Miami 2010, MWA Cartagena 2011, MWA Panama 2014, MWA Cartagena 2015 and a panelist at the Maritime week Americas Miami 2012 and IBIA Convention in Cancun. She has been session chairman at the IBIA convention Dubai 2012
She conducted the IBIA Basic Bunker Course in Spanish in MWA Cartagena 2015, Panama 2012 and 2014 and is an IBIA board member since April 2011 and was reelected for three more years on February 2014. She is honorary treasurer and convention committee chairman and participates in the marketing, communication and finance working groups.

José Digeronimo has a degree in Maritime Economics from Universidad Argentina de La Empresa en Buenos Aires. He obtained an MBA in Shipping from ULACIT, Panama in 1997, and finished his Masters in Bunkers from Panama Maritime University in 2014.

In 1992, he started work for Panamanian Carriers Corporation in charge of the commercial operation of Ro-Ro and tanker ships and later undertook ship management.

In 1999, he became part of Petrolera Nacional where he started Transmarine Transportation, a bunker barging company of which he was General Manager until 2009, when he teamed up with Verenigde Tankrederij B.V., becoming a director and starting the operations of VT Shipping, a bunker barge company at the Panama Canal.

Rolando Garzaro is President and co-founder, GTBunkers. He has been in the petroleum industry since 1990 when he joined Esso at the aviation operation in Guatemala. From 1990 to 2005 Rolando held different positions with Esso in the divisions of lubricants, chemicals, safety and terminal operations.

In 2005 he joined the ExxonMobil Marine Fuels team as Central America Sales and Operations manager.

In 2008 Rolando left ExxonMobil to establish GT Global Services which is now a group of companies dedicated to the distribution of marine, aviation and ground fuels and lubricants in the Caribbean, Central and South America.